Our trip to St Lucia began with a Travelzoo offer for a 3-night stay at the brand new Harbor Club Resort for $399. Luckily we could extend to 5 nights for $599 and breakfast was included. Not knowing much about the island other than that I wanted to go, I had a lot to learn!

Airfare to St.Lucia can run about $1000 per person from Las Vegas or LAX, but with some help from sites like Hopper (to tell me when to buy) and Justfly (to watch for low fares) we were able to book our round trip flight from Las Vegas to St. Lucia on American Airlines for half that price!

There are two airports on St. Lucia., Hewanorra International Airport in the south, and a small commuter airport in the north. Our hotel was in the north! We arranged transportation through the resort which runs about $100 per trip, and luckily we were traveling with our sister and brother-in-law and could share the cost among 4 people.  The ride took us about 1 hour and 45 minutes and took us up the east side of the island, cutting over through the capital city of Castries, traffic jams and all, then north to Harbor Club which was right on the Marina.  I was extremely glad we had not attempted to rent a car and drive! The bonus was that our driver, Kurlan, was a great tour guide along the way!!!

It was late afternoon on a Friday, the pool and grounds were very inviting, plus we were starving! A pizza and beer poolside was just the ticket! The wood fired pizza fresh from the oven exceeded our expectations, and it gave us time to check out the Friday Night Street Fair.

A short taxi ride got us to the street fair by 7:30 pm, which was way too early to get the full effect.  After an all night flight we were not going to last until 10 pm. We did, however, get a sense of the sights, smells, and sounds without the crowds! We were surrounded by music as we strolled through the blocks of portable bars and grills. I tasted some freshly grilled fish and sampled the spiced rum, which made my throat feel like a flame swallower’s! There was fish grilling and rum pouring every few feet for several blocks down and across.  Unfortunately there was also many stray starving dogs, hoping to score some scraps! Sad 😞!

We decided to spend our first full day exploring the property and taking the free shuttle boat to Pigeon Island.

The weather was perfect and we could do some snorkeling and explore the National Park.  We had no idea how accommodating the hotel staff would be. A staff member was assigned to stay with us, get us towels, beach chairs, and watch our gear while we went exploring.  He even got us cold beers and a cooler full of ice!  We spent almost the full day there hiking to the top of the two peaks and exploring the ruins of Fort Rodney.  In a fortress at the peak were cannons dating back to the 18th century and a view of Martinique (on a clear day).  While the name indicates it is an island, it was connected to the mainland via a causeway back in 1971.  The water was a bit murky with mostly small fish, but our S-I-L persisted and spotted a puffer fish.  She also managed to get a pretty severe rash that lasted for a week, which fortunately did not itch.  We never figured out the culprit, but we suspect she brushed up against something poisonous in the water.

Before leaving Pigeon Island, we had to visit Jambe De Bois, the recommended restaurant, to pay for our beer.  We were glad we did!   Not only is it located within a converted brick structure that is part of the historic site, but it offers spectacular views, great service, a very good menu selection and great Pina Coladas!

Our Sunday plan was to head to the south end of the island to Anse Chastanet where we had a dinner reservation at the Treehouse! This was a suggestion from “1000 Places to See Before You Die”.  The island of St. Lucia is only 27 miles long so, the trek from north to south seemed very doable.  Our trip would take us down the east or Caribbean side and we could stop by the water fall, drive through the volcano, and even hike Tet Paul Trail overlooking the Pitons, two volcanic cones on the south shore, so we left at noon and hired Ernest, one of the hotel drivers for $250 and he earned it!!!

The road winds back and forth over several tall mountains through rain forests and small towns. Hairpin curves would only begin to describe the turns!!!  Ernest had grown up in the Souffries area and knew every spectacular overlook! The journey took us from noon to 4:30 pm! Anse Chastanet was certainly well-hidden! The road turned into a one-lane paved path covered by broken layers of patched asphalt twisting through forested mountainside.  We were questioning why people would endure this treacherous road and began to get concerned about the ride back home in the dark!

Ernest dropped us off at the gate, which was very secure! We had hoped to roam around, but security only allowed us access to the beach bar and The Treehouse.  We then learned that the resort is almost always accessed via boat and water taxi and is also a very exclusive wedding destination.  We did manage to meet the chef responsible for preparing exotic Lion Fish dishes on the beach and he allowed us to take a photo for the Lion Fish University website.

“The Treehouse” was built in the treetops and the food was delicious, but pricey.  The staff attire was reminiscent of the native dress and very colorful, but they were not exactly friendly or helpful, probably because we were not guests of the resort.  Since we experienced such an amazing day getting to Anse Chastanet, it made it worth the trip.

The highlight of the day and maybe even the entire trip was Tet Falls Nature Trail.  Luckily Ernest had grown up here and was very familiar with the area.  The tour took about 2 hours with a local guide.  She was delightful!  We meandered up hill through gardens of pineapple crops, cashew trees and many other local food varieties, including apricot trees which displayed the largest apricots we could ever have imagined!   As we learned about the native people and the history of the area, the views became more and more spectacular!!!  The “Stairway to Heaven” sign was aptly named.  Once we reached the top, there were the Pitons in all their grandeur.  They looked as though we could touch them!  From the comfort of our home as we were looking through tour books, we had considered hiking Petite Piton.  Ha!  It is a minimum 4 hour hike in the heat and humidity and you definitely would have needed hiking poles and hiking boots and a lot of experience.  Grand Piton with its thick jungle forest didn’t look inviting either.  Since we had a glimpse of one of the local critters, a python posing for tourist photos, along the way, we were sticking to the wide trails of Tet Falls!

The tour of the drive-through volcano was also very interesting.  After you have seen volcanos in Ecuador and Peru and been to Yellowstone, a few steaming vents and bubbling mud pots were not too impressive.  By the time we returned to Harbor Club, it was near 10 pm and we had a really full day.  We were tired and extremely grateful for Earnest’s safe driving and fabulous commentary!

The next couple days were spent relaxing by the pool and enjoying the amenities of  Harbor Club.  We did venture out for some shopping and each evening tried some less than exciting restaurants recommended on Trip Advisor.  But the pizza at the hotel was tough to beat!

On our last evening, we decided to book a sunset cruise on a catamaran.  It gave us a different view of St. Lucia looking back toward the island and the skyline.  We enjoyed a most beautiful cruise accompanied by rum drinks.  What then happened would have tripled the cost of the cruise.  We encountered a mother and her baby Humpback whale!  We were able to follow them for almost 30 minutes and snap countless photos.   The captain said that even on the whale watching excursions they rarely encounter whales this time of year.  What a way to end the trip!

Well, at least we thought that was the end of the trip.  The next day our flight was canceled and we were booked on a later flight, which was also canceled.  Apparently it was a crew overtime issue, but luckily Harbor Club extended our check out until 3pm and then American put us up at an all-inclusive resort for the night.  So, yes, a little inconvenience, but really?  An unexpected whale siting AND an extra day on a beautiful island for free!  Yes, I would say it was a great trip! 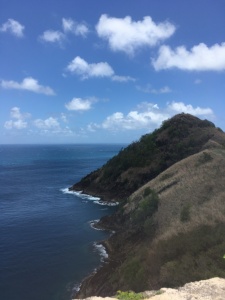 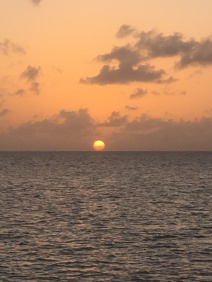 Sunset from the Catamaran 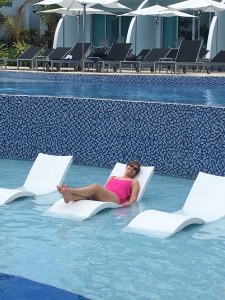 Our balcony at Harbor Club