Choosing a cruise is not easy.  There are so many cruise lines, ships, and itineraries to choose from that it took us months to settle on Celebrity and for awhile my head was spinning.  Luckily I was referred to an expert travel agent who had sailed the seas on many of the ships and visited many of the ports numerous times.  Obviously budget was a consideration.  We also knew we wanted to visit Greece and Venice.  Our agent advised us to pick a time frame, either early Spring (unfortunately caused a schedule conflict) or late summer.  This would allow us to avoid the crowds and also avoid the sweltering summer heat in those areas.  Once she knew our checklist of wishes, she steered us to Celebrity Equinox.  This was not our first cruise, but it was our first Celebrity Cruise.  She suggested the 12-day excursion with a few days added on either end to explore the ports of Barcelona and Venice.  She also suggested we take advantage of the special and upgrade to a Veranda room.  We did and I am forever spoiled!  Celebrity was also offering the 1-2-3 Go package, which got us the classic beverage package and a $150/per person room credit.  That too proved to be of great benefit!

The Veranda room gave us plenty of room for luggage and to move around comfortably, plus the bonus of a balcony where we could sit and watch the ship slide into port or maneuver out of port….and it gave us a place to dry our hand-washed laundry on the sea days.  The dates we chose for our cruise were great, we did however find the humidity in August a little challenging. We found ourselves going through more clothes than we had planned and a few photos look like we had just  stepped out of a shower!  Fortunately none of our excursions were rained out and we had blue skies, or bright sunrises and sunsets as the backdrop for every photo.

As far as I am concerned, the beverage package is a must!  We could get our hot chocolate and orange juice every morning, bottles of water to take on our excursion, wine with our evening meal and an occasional cocktail as we watched the sun set from the top of the lawn deck, or cheered for our fellow-passengers as they played croquet, bocci ball, or bags…and yes, the lawn deck has a large expanse of real grass!    Without the “classic beverage package”, we would have had to pay for each and every one of those beverages plus gratuity.  Our package covered the gratuity, as well. 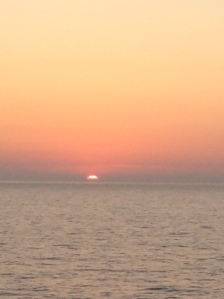 Airfare specials to Europe were not very prevalent during the high tourist season, but we were able to get round trip airfare on Air Canada taking us through Toronto on the way to Barcelona and through Montreal on the way back.  We had also decided to tack on a two week side trip after the ship docked in Venice and spend 2 weeks in Great Britain visiting our friends.  Ok I admit….. complicated!!!  Fly from Las Vegas, to Barcelona, disembark in Venice, fly to London, spend a couple weeks in England and Scotland and then fly back to Las Vegas.  Wow, packing for 30 days of travel with two very different climates?  Also, when you attempt to book airfare to and from two separate places in Europe, the system tries to charge you for one way tickets….and apparently based on the costs, one-way is discouraged!!  With some guidance from my Great Britain friends I learned that there is a way to book multiple destination flights, which turned out to be half the cost of the separate one-way trips that I was using.

Cruise booked! Airfare booked!  Now I had to find hotels at each end of the trip and also book excursions!  Our cruise would take us from Barcelona to Nice, to Florence, to Rome, to Naples, to Santorini, to Ephesus, to Athens, to Kotor, Montenagro; and then end with two days in Venice.  We opted to stay an extra night in Venice to allow us more tourist time but also allow us to get to the airport in time to fly to London with enough daylight left to take a train to Bath where we would spend the night and take a train back to London the next day.  We could spend a few days in London before taking a train to Durham to meet our friends.  Once there, we would spend 10 days visiting Scotland and England, and then fly back to Vegas!  Whew!

Actually, with a lot of patience and time to plan, it was fun putting all the pieces in place.  With the help of Hotels.com, Trip Advisor, Rick Steve’s “Cruising the Mediterranean”, the help of our friends Robert and Elaine in the UK, and the help of my friend Meaghan who had just returned from cruising Europe, I planned the perfect trip!!!!

While Rick Steves may argue that the excursions sold by the cruise line are more expensive and you can do it on your own, we were very glad to pay a little extra.  It allowed us to get off the ship earlier than the other passengers, we had an informative guide (English speaking), who took very good care not to lose us.  We did not stand in long lines for tickets for the “main attractions”, and we could relax and enjoy the scenery without worrying that we might get stuck in a traffic jam and “miss the boat”!  For us,  the ship excursions were worth every penny (ok, dollar) spent!

The only downside of the trip was the lack of time to blog each day.  Even if I had more time, the ship’s internet was excruciatingly slow and exorbitantly expensive.  Luckily, I took good notes and have lots of photos to share!  One important warning to European travelers:  BE SURE THAT DATA ROAMIMG ON YOUR CELL PHONE IS OFF!  IF NOT, PREPARE TO PAY MORE THAN THE COST OF YOUR AIR FARE FOR ROAMING CHARGES!!!!